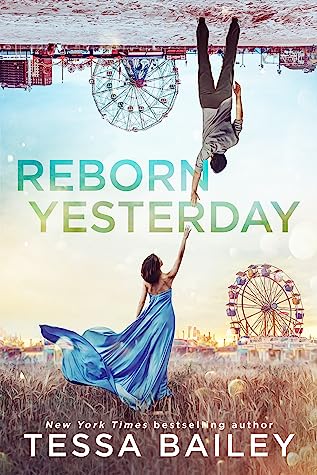 “… I’d almost fooled myself into believing I was nearly human. Then I meet you, I smell you, and I’m reminded I’m a beast. The man knows he can’t and shouldn’t have you, but the animal refuses to share.”

Once again I was in search of a book that would take me out of reality and transport me into an entirely new world – some far away from current events. I figured one of the best ways to accomplish that would be a paranormal romance. I used to read exclusively paranormal and it was the genre that really got me into reading many years ago, but it’s been a while since I’ve read one. When I saw this new release from Tessa Bailey I thought it sounded perfect for what I was looking for and it ended up being just that! I’ll admit, the first thing that caught my eye was the cover, while it doesn’t scream paranormal to me, it’s beautiful and made me want to see what it was all about. But then the blurb sounded really interesting so I one-clicked and dove right in! This was actually my first time reading a book from Tessa Bailey and I really enjoyed it.

Ginny Lynn, a quirky funeral director has seen her fair share of dead people over the years but it seems extra unfortunate that the man currently on her embalming table is so incredibly handsome. She finds herself hesitating to do her job because it’s such a shame that someone so beautiful is no longer living and it’s a good thing she’s delaying because she gets the shock of her life when the man suddenly opens his emerald green eyes and completely changes the course of her life. She shouldn’t know that vampires like Jonas Cantrell exist but thanks to a prank from his roommates, she’s thrown straight into their world and into the fight for both her life and her heart.

I think one of the things I liked most about this story was its modern yet vintage feel. It was set in the present day but Ginny was very much an old soul, and of course, Jonas has been around for many years, and it just provided this sort of classic, timeless vibe that I really enjoyed. I thought the lore and the world that the author is building was interesting and well done. Jonas and Ginny’s pairing was both charming and steamy. It was definitely insta-love but when it comes to paranormal that’s pretty much the norm so I was more than okay with it. There were a few parts that were a little slow but overall there were plenty of twists and turns and a few surprise reveals that I wasn’t expecting that kept things exciting. I also really enjoyed the secondary characters, Roksana and Tucker were my favorites of the supporting characters and I was pleased to see that there are plans to continue the series to feature some of these guys! Like I mentioned earlier, this book was exactly what I was looking for to “get away” for a little bit and I’ll definitely be keeping an eye out for future releases in this series!