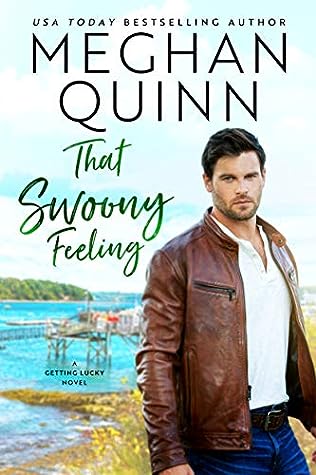 “…I was made to woo, and damn it, I’m going to fucking woo.” I stand from the stool and fold up the letter. “I’m going to woo this girl so hard.”

If you’re at all familiar with this series you were probably already at least halfway in love with Brig, the youngest of the Knightly brothers before you even picked up this book. He was such a memorable character in those stories and his quest to break the curse and find his true love was such a strong theme throughout this series. Well, now is the time! After helping all his brothers land their significant others, Brig FINALLY gets the chance to find the perfect girl for himself.

It’s no secret that Brig is a hopeless romantic, that poor boy wanted nothing more than to have a special lady that he could woo and spoil so when he learns of a secret Summer of Love pen pal program in his town, he’s ALL OVER that! Ruth, on the other hand, had pined for Brig for years but never got the courage to make a move. When she finds out her friend signed her up for the pen pal program she’s not happy until she realizes that her pen pal must be Brig. At her friend’s insistence, Ruth reluctantly agrees to play along and write him back. While they start to form a connection via their letters, a twist of fate makes their businesses neighbors and they find themselves forming a bond in real life. But in Brig’s mind, he’s torn between two women, his new pen pal and his new friend, Ruth. He’s falling for them both but when he finally learns that his pen pal and Ruth are one and the same, will he have lost his chance with her?

This book was so much fun! First of all, we get so much Knightly brother goodness, it was fun seeing the tables turn and having the other 3 brothers helping Brig with his love woes for a change. There are some classic Knightly brother group texts in this one! It was hinted in the other books that Ruth, the local coffee shop owner, was harboring feelings for the youngest Knightly brother but she always came off as so quiet and shy. I loved getting to see another side of her, she was a really great heroine and you couldn’t help but root for her. Unrequited love is never easy and we get to go through all the ups and downs with Ruth on this journey.

Brig didn’t disappoint either. He is such a sweetheart but oh man, he can also be so clueless sometimes! You’ll probably find yourself yelling “open your eyes!!” and “how can you not see that it’s her!!” quite a lot while you read this. Nothing he does is ever in malice so I just found his cluelessness to be endearing and so much more entertaining when he finally gets his head out of his ass hahaha. He and Ruth may have been “friends” for most of this story but it was just so adorable and it really was like they were dating, even if he didn’t realize it. They had really great chemistry and I loved how everyone else worked together behind the scenes to make sure they ended up together.

While I’m sad that there are no more Knightly brothers for Meghan Quinn to write about, I hope that this wasn’t our final trip to Port Snow. I’ve really grown to love this town and would welcome any chance to take a trip back!

One thought on “Review! That Swoony Feeling (Getting Lucky #4) by Meghan Quinn”