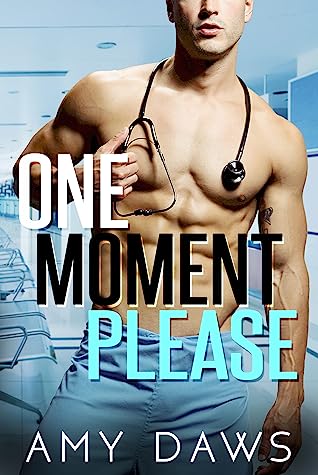 Lynsey Jones’s first run-in with Dr. Josh Richardson involved dumping French silk pie in his crotch. Her second run-in with him involved plenty of cocktails, a shared Uber, and a steamy night together. The third time she crossed paths with Dr. Dick was as a patient of his in the ER where he not only tended to her injuries from the worst Tinder date ever but also informed her that she was pregnant. He may have thrown her for a loop with that news but she was about to rock his world when she tells him that this surprise baby belongs to him. Can this one-night stand turned into an accidental pregnancy result in an actual relationship for these two or will Josh’s troubled past prevent them from ever being anything more than co-parents?

Overall I thought this was an enjoyable read. I liked their meet-cute and was glad that the pregnancy wasn’t the result of being totally irresponsible. I thought that Lynsey and Josh had some good banter. Josh was such a grump and it was funny seeing Lynsey come into his life like a wrecking ball. I thought Lynsey was a good heroine. She was driven and had goals and didn’t let the unexpected pregnancy hold her down. I think she held her own against Josh, although there were a few moments where I wish she had a little more backbone sooner. Josh was a tough nut to crack. For most of the time he acted like a major jerk but there were tiny glimpses of a good guy hidden in there. He repeatedly said he was incapable of love but then his actions revealed that really wasn’t true – the frustrating part was that he couldn’t see it. There was a really nice turnaround toward the end – I both liked it and thought it might have come a little too easily. For how he treated Lynsey from time to time, I would have appreciated more of a grovel but I wasn’t too bothered by how it actually played out. This was mostly a pretty easy read, but I liked that it did delve into some deeper topics along the way. If you like accidental pregnancy stories or grumpy heroes, you should think about checking out this one!