Are you ready for a trip back to Port Snow? Get ready to fall in love with Reid and Eve and check out our review of That Secret Crush!! 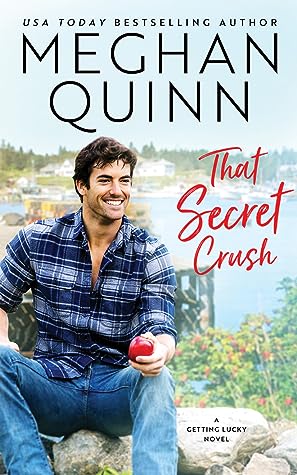 My dream girl, my fantasy, the most untouchable woman to ever walk into my life.

Port Snow has got to be one of my favorite fictional towns and the Knightly brothers are definitely one of my favorite group of characters! We’re now on our third visit to this town and it truly does feel like coming home again when you get to dive in. I love catching up with old favs and seeing what everyone is up to. This book focuses on Reid Knightly. He may always be quick with a joke or a dirty comment, but ever since returning to Port Snow after losing his restaurant and having a falling out with his best friend, he’s been a bit lost – unsure of the direction his life should take. He’s also harboring a secret crush on his estranged best friend’s twin sister, Eve Roberts. He’s never acted on his feelings for her out of respect for his friend but now that he’s not really in the picture there’s really nothing stopping him – especially when he catches a hint that Eve may have been crushing on him too. Once they give in to their feelings, they fall hard and fast but when a new professional opportunity presents itself and brings Eve’s brother back to town, things are about to get a whole lot more complicated and their newfound relationship is really going to be put to the test.

I totally loved Reid and Eve together. They had such good banter, they made great friends and even better lovers. I really felt for Reid, he had a few tough breaks. Between the dreaded Knightly brother broken love curse and the really heartbreaking way he lost his restaurant, he’d been through a lot. But he also made me want to smack him because of how he’s been wallowing for so long rather than learning from what happened. That’s where Eve really shines though, she did not take his crap and while she was supportive and understanding, she let him know when he was being an idiot and did not go easy on him. She was such a tough cookie and I think she’s been my favorite heroine of the series so far. I also loved the way she handled her brother, Eric. Between him and Reid, she had her hands full in terms of dealing with male stupidity! Reid did show such growth over the course of this book. I loved seeing him reenergized about the new opportunity that was offered to him, it was fun seeing him find his way back to himself and also learn from his mistakes when it came to his relationship with Eve. He really was such a great guy and there were plenty of swoon-worthy moments and a pretty epic grovel as he tried to win her back.

As I mentioned earlier, we also get to see all of our past favorites featured heavily throughout this story. The texts between the Knightly boys and their sister were laugh-out-loud funny and one of my favorite parts of the whole book! I’d seriously read a book that was exclusively texting between them, they were that good! I think we also saw more of Brig in this book than any of the earlier ones and OMG, I NEED his book like tomorrow because he’s a freaking riot and that poor boy deserves to find his one true love! We’ve got several months before we get his story, though, but I really can’t wait for my next (and probably last :::sobs:::) visit to Port Snow!