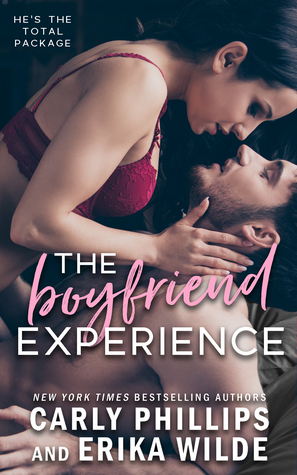 “I thought it would be fun and nothing serious . . . but I never counted on you getting under my skin, Evie.”

Evie Bennett thinks her friends are crazy when they suggest she try out a new boyfriend-for-hire app to find a date for her upcoming family reunion. But she hates the idea of showing up solo and hiring a stranger to accompany her to her family event sounds less painful than having to explain to everyone that she was recently dumped. Eric Miller has never done relationships but has never had trouble getting girls so he isn’t pleased to discover that his friends signed him up with a profile on their new The Boyfriend Experience App. He’s especially annoyed when his friend actually replies to the first message that Eric receives from a woman looking for his services but he’s not a jerk so he decides to meet with the woman. When he meets Evie he’s intrigued enough by her plight to actually agree to go along with her and play her boyfriend for the weekend in front of her family. They hit it off right away and put on a pretty convincing act for Evie’s family – but what will they do when they realize that the feelings they’re developing aren’t an act at all?

I picked this book up a few weeks back when it was on sale for free, the blurb sounded good and let’s be honest, who can resist a free book? I’m glad I gave it a chance because I thought it was a really sweet and sexy story and it actually had quite a bit more heart than I was expecting. I wasn’t sure what to expect from Eric at first, he came across as kind of a player in our first encounter but before long we see that he really is a nice guy and he’s had a pretty heartbreaking past which explains his stance on relationships. I really liked him with Evie. He may not have signed up to be a part of the dating app but he really stepped up for Evie while they were with her family. It was nice seeing Evie’s confidence build back up again too. She’s had a few bad relationships that did a number on her but Eric helped her realize that she was pretty amazing and that any guy should feel lucky to be with her. Most of the book was sweet and steamy but there was a bit of angst surrounding Eric’s stance on relationships even despite the feelings he’s developed for Evie. I enjoyed how everything wrapped up though! If you’re looking for an easy read that’s very sexy but will also give you plenty of feels, you should consider this one!