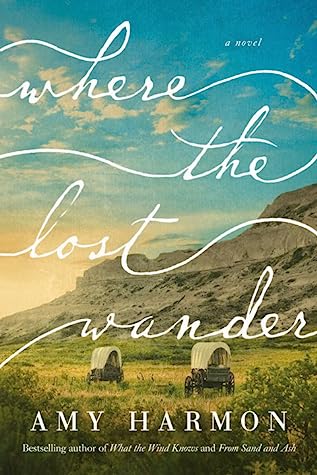 “I worry sometimes that you will get tired of carrying all of us, John.”
“I would carry you to the ends of the earth.”

Show of hands, who grew up playing The Oregon Trail on their computer? You know the one, the classic black and green screen where you’d load up a wagon full of unsuspecting family members and setting out on the trail, hunting for buffalo (but ending up with only rabbits), hoping your wagon didn’t flip when you tried to float it across the river because you were too cheap to pay an Indian to do it, and hoping no one died of dysentery. I played the game quite often as a kid (and again recently on the handheld version you can buy at Target) and it holds fond memories for me. I’ll admit, that was a big reason I picked up this book – the main reason being that Amy Harmon wrote it so I knew it would be an incredible story. Amy Harmon took the black and green screen that I associate with the Oregon Trail and breathed new life into it, turning it into sweeping landscapes filled with hope, heartache, danger, tragedy, and triumph. I was swept away and felt like I was living right beside Naomi and John and the rest of the Mays as they embarked on this harrowing journey from Missouri to the promise of a fresh start on the west coast.

You can just tell that this story was very well researched. Everything was presented with such rich detail, the entire story just came alive. The prologue sets the stage, detailing an event that happens later in the book and it’s a kick in the gut right from the start. After that, we’re taken back a few months to the start of the May family’s journey. Things start off a bit slow, and I don’t know if it was intentional or not, but let’s face it – life along the trail was slow and grueling and I felt that this really came across while reading this story so I didn’t mind the slower pace at first. There is certainly adventure and peril along the way but things really kick into high gear once the timeline catches up to the tragedy of the prologue. My heart still aches thinking of all that happened. I can’t even imagine living through all of that. It’s really a testament to the strength of these characters to not let it break them or their spirits.

For romance lovers, there is a wonderful love story woven throughout the book. John and Naomi may have been an unlikely pair, but they forged an unbreakable bond as they had to endure more in a few months than most people do in a lifetime. I just knew that as long as they were together, they’d be able to conquer anything. There was also a heavy focus on the love between a parent and child and the love between siblings.

There were a lot of difficult topics and scenarios that these characters have to deal with and I like that the author didn’t shy away or sugar coat how things really were back then. It wasn’t pretty but it’s our history. There was something in the author’s note that really stuck with me, so much so that I highlighted it and wanted to share it here – especially in light of current events. Here it is:

“I hope the reader will experience the story in the spirit it was written, recognizing that who we are is not who they were, and judging historical people by today’s standards prevents us from learning from them, from their mistakes and their triumphs. These people helped build the framework that we now stand on. We should be careful about burning it down.”

I think that’s such an important thing to remember right now. As the world is struggling with topics like systemic racism and equality for everyone, I think it’s more important than ever to remember where we came from. We can’t simply erase our history just because it was ugly, that won’t get us anywhere. What we can do, however, is educate ourselves so that we can learn from the mistakes of the past and then seek to do better.

Ok.. getting off my soapbox, I’d just like to say that I loved this story and I would highly recommend it even if historical fiction isn’t usually your thing. I think you may just be surprised by how much you’ll enjoy it!

One thought on “Where the Lost Wander by Amy Harmon”